The UK’s Stand Out Cities: Manchester 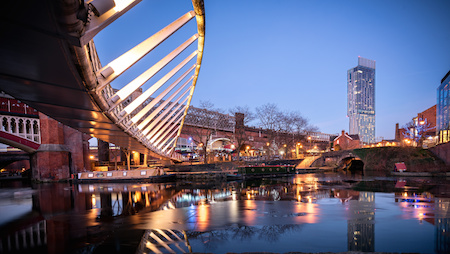 Manchester has been an economic powerhouse since the early 19th century. Over the decades, the city has proved that it is open for business and that it can successfully rise to the challenges presented by increased global competition. As a result, this British city is considered one of the best European cities for business and startups in a wide variety of industries.

An overview of the local economy

Manchester is at the forefront of the UK’s economy and is considered a model for business growth and economic prosperity at international level. The city has one of the highest growth rates of the Core Cities group, and is also considered a Beta global city along with powerful economic hubs like Stuttgart, Berlin, Vancouver, and Guangzhou. Manchester has capitalised on its relationship with prosperous global markets like China, the Asia-Pacific region, North America, and Australia.

Nearly half of the Northwest of Englandâ€™s Top 500 companies are based in Manchester, along with a number of FTSE 100 companies. Overall, the Mancunian economy generates 5 per cent of the UK’s GVA, having a total gross value added total of Â£54 billion.

In order to foster growth, Manchester has invested heavily in knowledge-intensive industries, such as biotechnology, high-tech manufacturing, financial services, digital and creative industries, and environmental technology. These industry sectors benefit from the expertise offered by Manchester University, which has been listed by the Research Excellence Framework as a globally influential institution. The university is very supportive of local enterprises and has established a series of knowledge exchange schemes and partnerships with key industries in Manchester.

Approximately 280,000 people work in the financial and professional services sector, which is the UK’s largest outside London. Health and social care is the second largest industry, with 172,000 employees. The development of the creative and digital media sector has been one of the key drivers of Manchester’s economic growth. According to a 2015 report published by the local authorities, Manchester is now Europe’s second largest creative hub thanks to initiatives like MediaCityUK, a purpose-built business space that is now home to leading corporate players like the BBC, ITV, dock10, Royal Bank of Scotland, BUPA, and Santander. This sector employs 65,000 people.

Other key sectors include education (with a GVA of Â£3.2 billion) and advanced manufacturing, which employs one in ten of the city’s residents. Tourism and hospitality are also important industries, since Manchester is the UK’s third most visited city and one of the world’s most popular destinations for business conferences, trade fairs, and exhibitions. The local tourist sector is worth over Â£6 billion, and more than 20,000 people are employed in the business hospitality industry.

Employment and Startups
Since the early 90s, Manchester has experienced an impressive 24 per cent increase in the number of jobs available. Job growth levels have averaged 3.2 per cent a year since 2011, and nearly 13 per cent of all jobs belong to the knowledge-intensive sector. According to the Manchester Airports Group, the city is the second best place in the UK for companies looking to hire highly qualified employees. In addition, the Greater Manchester Forecasting Model has stated that a further 100,000 jobs will be created in the city by 2023.

Similarly, the number of new businesses has been steadily growing over the past decade, reaching a 20 per increase between 2004 and 2012 alone. It is estimated that there are currently 94,000 businesses registered in the city. A vast majority of these (75,000) are micro-enterprises with 0-9 employees, and there are 17,5000 SMEs throughout the city. Approximately 13 per cent of the city’s workforce is self-employed, and Manchester’s startup rates are 64 businesses / 10,000 people.

Government schemes that promote business growth
The central government has provided support at various levels in order to maintain a healthy and thriving business community in the Manchester area. Since 2012, more than Â£5 million worth of loans have been given to new companies as part of the Start-Up Loans Scheme. Other noteworthy initiatives include the following:

– Business Growth Hub, which has helped local SMEs secure access to finance and which offers coaching and mentoring services
– The Digital and Creative Fund, a joint initiative between the Business Growth Hub and the Technology Strategy Board, which has allocated Â£1 to supporting start-ups and SMES in the digital and creative sector
– Business rates discounts for companies who want to relocate to the Manchester Enterprise Zone
– The Corridor Growth Fund, which grants loans of up to Â£169,500 to firms involved in R&D
Manchester is an economic giant that has been able to successfully reinvent itself and redefine the basis of its competitive advantage. As a result, Manchester ranks high among the UK’s top cities for business.